Cigarettes have always been deemed “Cool” but why is that? Well, the answer is imbedded in the history of the cigarette and how the packaging of the cigarettes created the image of them to be something cool. The issue with early cigarettes and tobacco in general was that they were not deemed harmful, most Hollywood stars and starlets were all smoking expensive tobacco brands through pipes because the advent of cigarettes which made people think of them as products linked to high social status or just the rich and famous people.

Although the use of Tobacco dates back to 5000BC it is important to note that the commercialization of the tobacco started in Ancient China and Mexico, the tobacco speared far and wide and soon it reached England, where it was advertised as “Gentlemanly and Masculine” it soon came on the ships to America, this can be as early as the time Christopher Columbus actually came to attack the Natives of America.

The first cigarette was actually created by Washington Duke in the mid-1860s, where he hand-pressed as well as hand-rolled tobacco in paper. He sold these to the soldiers at the end of Civil war in America, but the issue was that hand rolled cigarettes took a long time to make and there was no way to mass produce them. However, in 1880s James Bonsack created a machine that pressed and rolled cigarettes much faster and soon cigarettes were being mass-produced and their popularity raised. 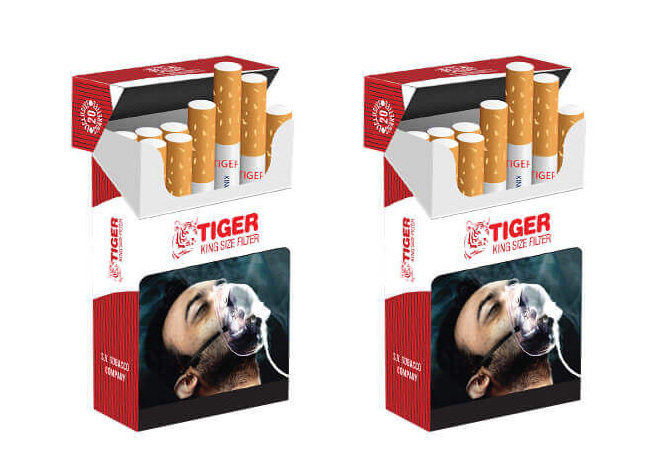 This was well and good; However, the packaging and advertisement for cigarettes did not start until the early 1900s. From 1920 to 1930. The packaging of cigarettes was bright and colorful, each cigarette has beautiful illustrations and many came in collector’s packs as well. Many companies even launched their own steel or other metal cases for the collectors to purchase and have in their limited time promotions.

Companies like Camel and Lucky Strike were the winners of this era, they created custom cigarette boxes with illustrations that promoted the idea that cigarettes were for cool kids or they would help you check your weight. Lucky strike came out with many posters of the sort, one in particular using the tagline

“The Shock of Facing what your Figure may become When Tempted, Reach out for a Lucky Instead.”

This was used with the face of Miss America illustrated on the front cover, the company also added in the ad that the cigarettes did not help lose weight but if you were tempted to eat, you could divert your attention towards smoking a Lucky strike instead.”

In another add they used the tagline “Do you inhale?” as an old smoking alternative for “You can’t sit with us”, it showed that you were not the part of the “it” crowd if you could not smoke a lucky strike and inhale it. Mind you, this was before the cigarette health effects came out.

In the World war 2, Chesterfield Cigarettes started promoting their cigarettes in a romantic mannerism, the Cigarette boxes would have illustrations of soldiers away from home and the taglines insinuated that the soldiers away from home felt closer to their home when they smoked. One particular tagline used by Camels was highly popular in this era used for the ads, it goes as follows;

This was used over a picture of a soldier sitting against a tree in army clothing. This made people buy cigarettes in a form of sentiment for home. On the other hand, Chesterfield used taglines like;

“It’s His Cigarettes and Mine”

This is over the illustration of a female soldier wife, the romanticism of the cigarettes made the women feel closer to their war gone husbands.

A new and war-free era began soon; the music and color was what made people feel normal in this time, the war had ended two decades ago but most people remembered it and so they started to want “Normality” again. In doing so, the ads and banners were all promoting a normal home life. Camels again came out with an ad that summarized most ad campaigns after war.

“Nothing Like this in the Army. (Except the Camels)”

This was above an illustration of a woman lighting a cigarette for her husband on the dinner table.

Fast forward to 1960s-1970s, the rise of Beatles and music as well as the rise of fashion again after two decades of war. Slims came out with their famous skinny cigarettes, the posters and banners that advertised these were of thin women, doused in jewelry and luxury clothing while smoking a cigarette or holding one. The cigarettes were mainly aimed at women and were therefore advertised in a rather feminine way. One tagline read:

“121 Brands of Fat Cigarettes and Virginia slims are made to fit you.”

These words influenced people to think of cigarettes as a diet again and they were seen as elegant as well as a part of jewelry. All posters showed illustrations of women posing in high fashion clothing with cigarettes in their hands and even though they used less product, these cigarettes were sold at a higher price. They were basically the Supreme of 1960s.

2000 to the present time, the bad effects of cigarettes were now widely known, however people did not seem to quit smoking because there was still the issue of teens thinking that smoking was cool, due to all the packaging and advert illustrations showing them that smoking was cool. This is when the word started to shift, most country’s started use simple cigarette packaging, which was required by law. No advertising was allowed on the cigarette packs and the tempting taglines were then removed.

All onscreen ads are now required to have the health warning “Smoking is Injurious to Health” as well as the smoke packs having the same warning. The images on the packs now hold images of effects of smoking and companies like Custom Cigarette Boxes show cigarette boxes on their websites to be completely customizable and that is true however the company that orders, much get them manufactured according to the law or there can be serious legal consequences.